The idea of Buildpacks has been around since 2011. It was first created by Heroku, with Pivotal jumping on board to help create Cloud Native Buildpacks. But what are buildpacks?

The concept is simple: turn your application source code into runnable container images that can work on any cloud. Think of it as similar to a snapshot of your source code that can be deployed to different cloud platforms.

The major point of difference for Buildpacks is that it is a framework. This also means that a platform tool is required to orchestrate the creation of your application image. Buildpacks is widely supported by tools and platforms such as pack CLI, kpack, Tekton, Google cloud run button, Heroku, Skaffold, and Build.io.

So how do Buildpacks work? and why do they matter?

Buildpack exists to create an image of your source code and its associated requirements to make it run. The idea is that Buildpacks will take a look at your apps, download the dependencies, configure the apps, and communicate with bound services to make things work.

Here is a quick example of how to create an image using the CLI pack command:

The above command will trigger the lifecycle of a buildpack, which follows the four steps below:

Here is a quick summary of what happens during each stage of a buildpack execution lifecycle that results in an app image:

During this lifecycle process, there is one compulsory script (buildpack.toml) that runs and four additional scripts that sit in the bin directory. Here is a quick description of what they do:

For older buildpacks, there may be a bin/compile. However, this is no longer in use and has been deprecated with bin/supply and bin/finalize as the alternatives.

Buildpacks also populate a Bill-of-Materials, or BOM, to provide extra information on what's inside your container and how it was constructed. Here is an example command on how to view your buildpack's BOM:

That's the introductory beginner's gist to how Buildpacks operate.

How are Buildpacks different from Docker Images?

When it comes to Docker, you can build containers via Dockerfile - which is a set of commands that results in a container image. Dockerfiles requires a base image to start from, meaning that commands are built on top of this base image to modify them.

In contrast, Buildpacks turns your source code into a runnable container image. This is achieved through a set of executions that looks at your source code and generates a plan to build and run your application. It does this by encapsulating the app's language ecosystem toolchain and grouping them together into collections called a builder. An additional layer may be added that includes dependencies and commands. It creates the container rather than using a pre-existing container that later gets modified based on defined requirements.

Can you use buildpacks inside Docker?

The quick answer is yes. This is because Docker is the containerized environment that holds the code. A buildpack is the code image, meaning that it is separate from the environment itself.

What is a buildpack builder?

A builder is an image that contains everything needed to execute a build. A builder image includes the buildpack itself, the lifecycle files, and the stack.

Where do Buildpacks fit into the app development cycle?

Buildpacks lets you containerize your code and turn them into pre-packaged copies of your app that works at runtime. It achieves this through the set of scripts that will perform dependency retrieval tasks and anything else that's required to compile and run the code.

With Buildpacks, there is no need to set up the base infrastructure for the virtual machine. Instead, the image can be used to deploy to infrastructure platforms such as Build.io and run apps in the cloud with ease. 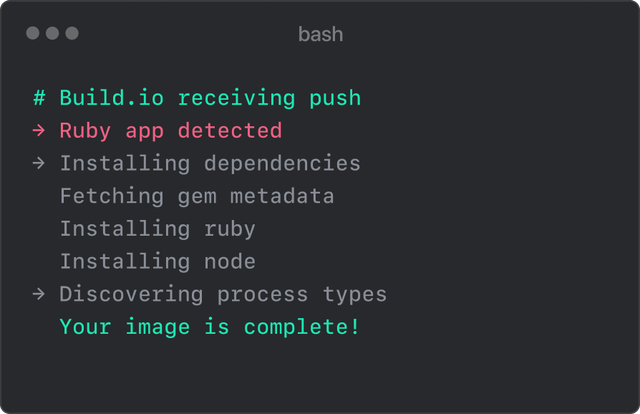 Major cloud platforms such as Google Cloud, AWS, and Azure have buildpack deployment support. Heroku and Build.io are comparable services that create an easy deployment bridge for your chosen cloud infrastructure.

What's the difference between Buildpacks and buildpacks?

Overall, buildpacks are a versatile way to package up your apps for deployment. The major perk is that it reduces the general time costs that come with trying to ensure that everything in the deployment is in sync. Turning your source code into a runnable image, it makes shipping apps faster by cutting down the need to manually set up the code and its dependencies for each deployment.